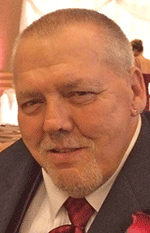 Jim was born July 30, 1952 in Potsdam, the son of the late LeRoy and Lulu (Drew) Perry. He attended schools in Brasher and graduated from Norwood-Norfolk Central School in 1971. He married Betty Reid in 1981, ending in separation.

Jim worked for many years as a groundskeeper at Clarkson University, retiring in 2007. He was a member of the Potsdam Elks Lodge, Sons of the Amvets Post #262, and an Honor Roll Member of the Potsdam Volunteer Fire Department. He enjoyed hunting, fishing, and socializing with his friends and family.

Jim is survived by his children and their spouses, Justin and Jen Perry of Potsdam, Derek and Courtney Perry of Potsdam; Brian Perry of Norfolk; and Danielle and Warren LaValley of Brasher Falls; his grandchildren, Jaxson, Wyatt, Hunter, Brianna, and Logan; his sisters, Linda and John Newtown of Madrid and Patricia Davis of Plattsburgh; and many nieces and nephews including, Terry “TJ” and Tammy Newtown of Massena.

In addition to his parents, he was predeceased by a sister, Georgianna Newtown.

At his request, there will be no calling hours or services.

Arrangements are with the Donaldson-Seymour Funeral Home, Potsdam, where memories and condolences may be shared online at www.donaldsonseymour.com.

Memorial contributions may be made in his memory to Potsdam Volunteer Fire Department.