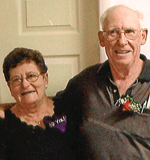 WADDINGTON — Jay V. and Ruth S. (Forsythe) Brady passed away unexpectedly, April 29, 2022, together as they always were.

The family would like to invite the friends and family of Jay and Ruth to honor their memory at a grave side service 11:00 A.M. Thursday, May 5, 2022 at St. Mary's Cemetery in Waddington, as well join them at a celebration of life following the service.

Jay attended and graduated from Massena High School in 1950.

Ruth S. (Forsythe) Brady, the daughter of the late William and Ruth (Denesha) Forsythe was born at the family home on August 31, 1936, in Waddington, NY.

She was a graduate of Waddington High School in 1954.

After graduating, Ruth furthered her education, studying at SUNY Plattsburgh.

Jay was a jack of all trades, establishing two businesses of his own: Brady’s Trucking, and St. Lawrence Marine Supply Company.

In addition to this he drove truck 25 years for Walsh Trucking in Massena and most notably his dedicated career of 33 years at the New York State Power Authority, retiring in 1989.

Additionally, Jay was a member of the Moose Lodge, Elks Lodge, and proudly served his country in the United States Nation Guard, as well as served his community on the Madrid Waddington School Board, and as a fireman for the Waddington Volunteer Fire Department.

Jay had a unique way of leaving an impact on anyone he met and in addition to that, he knew someone just about anywhere he went.

Jay was a true jokester, and his sense of humor would light up a room.

Anyone who knew Jay has enjoyed his countless stories that he had gathered throughout his 88 years of life.

Ruth was an active member of her community and devoted much of her time to the community as such.

She was a lifelong and devoted member of the St. Paul's Episcopal Church in Waddington. She spent countless hours of her life helping support the church in any way she could, at one point even serving on the vestry as warden.

Ruth was the Cub Scout leader for the local troop which she took pride in.

She also served the community as an election inspector for many years.

In addition to serving her community, Ruth had many hobbies and talents to be recognized. She was an avid reader, fisherman, loved to knit, and had green thumb always having the most beautiful displays of flowers.

In addition to this, it was a guarantee that Ruth would be able to provide you with something good to eat as she was a fabulous cook and baker.

Ruth was a strong, resourceful, and sharp-witted woman who truly served as a rock to her family.

Similar to her husband Jay, whenever Ruth was around you were guaranteed to have a good time.

Jay and Ruth shared many hobbies.

Together they were world travelers to Ireland, China, Alaska, Hawaii, and a far. Contributing to this travel Jay and Ruth loved going on cruises, attending as many as 18 together.

Closer to home, they were avid boaters, spending their summers on the St. Lawrence River, sometimes spending weeks at a time cruising through the Thousand Islands accompanied by their sons and friends.

Even throughout the frigid North Country winters they kept busy snowmobiling. Additionally, Jay and Ruth frequently visited Canada and made many lifelong friends in doing this.

In their later years, Jay and Ruth wintered in Florida, where they would spend time with friends they made along the way as well as their family.

In addition to their parents, Jay and Ruth were predeceased by a son William “Bill” Earl Brady, brother Joseph, and his wife Rose Brady, and brother in-law Merlin Baxter.

You are encouraged to share memories of Jay & Ruth, along with photos and condolence with the family by visiting www.PhillipsMemorial.com