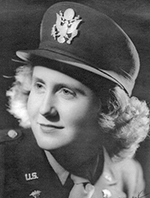 HAILESBORO -- Jane Wranesh, 98, passed away, surrounded by her family, on Wednesday, August 14, 2019 after a brief illness.

A funeral mass will be held on Monday, August 19 at 10:00 am at St. James Catholic Church, Gouverneur with Fr. Stephen Rocker officiating. Burial will follow in Hailesboro Cemetery with military honors. Calling hours will be on Sunday from 2:00 to 4:00 pm at the Green Funeral Home, Gouverneur.

Jane was born on August 16, 1920 in Oxbow, the daughter of Francis and Georgia Weidman Ridsdale.

She graduated from Antwerp High School in 1938 and attended Crouse Irving Hospital in Syracuse for nurses training. Jane served in the Army Nurse Corps during WW II in Britain and France.

In the midst of a memorable snow storm, Jane married Michael Wranesh on February 10, 1947 at St. James Church, Gouverneur with Fr. Diviney officiating.

She was employed as a registered nurse in Gouverneur at Van Duzee Hospital and EJ Noble Hospital, worked for the St. Lawrence County Physically Handicapped Children's Program for 12 years, and in retirement, at the Gouverneur Library for 12 years.

The couple lived in Hailesboro since 1947 in the home they built. Jane was a member of St. James Parish, Hailesboro Home Bureau and was a community volunteer. She enjoyed spending time with friends and family, and gardening. In her later years, phone calls were a great source of enjoyment.