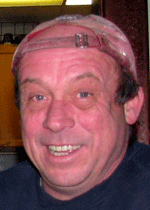 A gathering of remembrance will be announced at a later time.

He is survived by his brothers Kenneth Guy Jr., of Virginia, Bruce (Roberta) of Potsdam, Brian of Hannawa Falls, and Daniel (Janice) of Richmond, Virginia; a sister Dawn Ramsey of Georgia and many nieces, nephews and cousins.

He was predeceased by his parents, a brother in law Don Ramsey and a sister in law Charmaine Loveless.

Monk was born in Canton, NY on September 1, 1960 to the late Kenneth Guy Sr. and Greta (James) Loveless.

When he was young, he enjoyed playing in the local Pop Warner football league.

He attended Potsdam Central School where he was an excellent hockey and soccer player, graduating in 1978.

After high school he attended North Country Community College and played soccer during his time there.

After his time at NCCC, Monk worked for St. Mary’s Church as a groundskeeper and cemetery caretaker for 18 years before becoming a painter.

Monk got his nickname for his agility and athleticism.

He was very active in Potsdam Softball teams and leagues and at softball games in various area Fire Department field days in the Potsdam area.

Being a true Montreal Canadiens fan, he took pleasure in teasing the Bruins and Rangers supporters.

Monk loved spending time at the Moose Lodge in Potsdam with his good friends and was a lovable man who will truly be missed.

Thoughts, condolences, prayers, kind words and memories may be shared with Monk’s family and friends at www.GarnerFH.com.