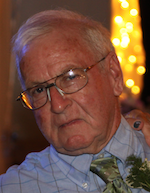 James was born on November 20, 1939, son of Arby and Anna Johnson and graduated from Salmon River Central School in 1958.  He married Erma Blair on August 19, 1961 at St. Joseph’s Church in Bombay. The ceremony was officiated by Father Dwyer.  They spent 58 years together conquering many things as a pair but none greater than joyfully raising their family.

As a teenager, James worked at varying north country farms. He joined the workforce on the construction of the St. Lawrence Seaway in the mid 1950’s.  After the Seaway, he brought his talents to General Motors for 31 years until his retirement in February of 1993.

In his free time, he enjoyed activities such as snowmobiling, cutting firewood, ladderball, grocery shopping and having ice cream with his children on Fridays, and being in the company of family and friends at all possible times.

Arrangements are entrusted with the Hammill Funeral Home in Winthrop, where visitation will be held Monday from 2 – 4 p.m. and 6 – 8 p.m.  A Mass of Christian Burial will be held Tuesday at 10 am at St. Patrick Church in Brasher Falls with burial to follow in the parish cemetery.

Memories and condolences can be shared at www.hammillfh.com.