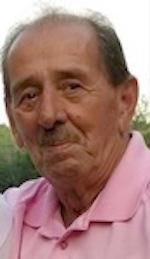 Funeral services will be held on Thursday at 11 a.m. with a fellowship luncheon to follow.

Graveside services will be held at 3 p.m. at Winthrop Cemetery, Cemetery Road, Winthrop.

On October 14, 1967, he married Judith A. Robson. Their marriage ended in divorce but were blessed with four children.

He married Nancy A. Bola on June 26, 2000, with a waterside wedding in Plattsburgh. They were best friends, and as their love matured, they worried about and cared for the other for 22 years.

Jim worked at ALCOA for a few years and went to the NY Power Authority in Massena. He worked for 36 years, retiring as the head of maintenance.

He also sold cars for Michaud's and Compeau's after work.

Jim enjoyed seeing the grandkids and great grandkids. They called him "baby hog", as he wouldn't let anyone else hold the little ones.

He loved his community and helped coach hockey, and basketball. He will be missed on Meadowbrook Golf Course, where he was every morning and spending time sharing with his grandkids his love of golf. He was a positive influence on their lives and supportive of their endeavors.

Family was a top priority to Jim, which was reflected in the get togethers, holiday celebrations and birthdays. He was a kind, gentle, sentimental, and humble man, loved by the people whose lives he touched.

Jim is survived by his devoted wife, Nancy; his children, Michael and Lisa Ploof of Potsdam, Sherri and Brad Arquiett of Winthrop, LaRae Ploof of Binghamton, stepson, Mark LeClair of St. Louis, his sister, Barbara Ploof Steele of Massena, 10 grandchildren, 15 great grandchildren, many nieces, and nephews. He was predeceased by a son, Brent in 2000, a stepdaughter, Amie Lee in 2001, and his sister, Sandra McLaughlin in 2017.

In lieu of flowers, those wishing to honor Jim can consider donations to the Brasher Winthrop Volunteer Fire Department or Tri Town Rescue Squad.

Please share memories or condolences with his family at www.hammillfh.com.