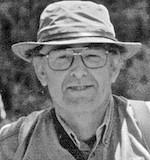 Jim was born June 4, 1935, in Centralia, Illinois. He attended Kaskaskia Junior College before graduating with a B.S. in Geology in 1957 from Missouri School of Mines (now Missouri University of Science and Technology). He got his M.S. and Ph.D. in Geology at the University of Illinois, Urbana. Jim married Margaret Faye Hubbard and the couple moved to the University of Central Missouri where he started teaching in 1961. In 1963 they moved to Normal to teach at Illinois State University. There, two children, Brian and Beth, were born. Jim taught for 5 years in Normal before joining the new Science faculty at SUNY Potsdam in 1968.

Margaret Carl died in 1972. A year later, Jim and his two children traveled to coastal Blue Hill, Maine, where on a long-distance blind date he met Susan Woodward Morrison, a widow with two small boys. It was love at first sight. They married only a few months later in October, 1973. That Fall they formed a new family with children ages 5, 6, 7 and 8.

Jim taught college courses at SUNY Potsdam in mineralogy, geochemistry, geomorphology, ore deposit geology and other electives including “The Land As It Was.” He led shows at the college planetarium to the soft sound of croaking frogs. In 1988 and 1989 he received the College President’s Award and the SUNY Chancellor’s Award for Excellence in Teaching.

Jim retired in 2001 after 40 years of teaching. In retirement, Jim organized luncheons called ROMEOS (Retired Old Men Eating Out) and honed a lifelong interest in American history. Jim wrote more than 20 articles for The Quarterly of the St. Lawrence County Historical Association. He spent the last years of his life enjoying tea on the porch with Susan, researching history of the North Country and spending time with family and friends.

Memorial Contributions in Jim's memory can be made to the St. Lawrence County Historical Association, 3 East Main Street; Canton, NY 13617.

Condolences, thoughts and fond memories can be shared online at www.garnerfh.com.