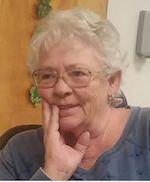 OGDENSBURG -- Memorial services for Irene “Reney” M. Palmateer, age 67,  will be held at 2:00pm on Saturday (May 15, 2021) at Fox & Murray Funeral Home. Entombment will follow at Foxwood Memorial Park.

Calling hours will be held on also on Saturday from 11:00 a.m. until the time of the service at the funeral home. Reney passed away at her home early Saturday morning, May 8, 2021 surrounded by family and friends.

She was predeceased by her husband, Elton; and a sister, Beverly Barley.

Reney was born on July 9, 1953 in Ogdensburg, a daughter of the late Mark & Dorothy (Sova) Taylor. She graduated from Ogdensburg Free Academy and later married Elton Palmateer on June 23, 1979 at St. Mary’s Cathedral. Her career began at Hackett’s Hardware where she worked for 21 years, moved to North Carolina and worked as a bank teller and later for Eckert’s Pharmacy. She retired in 2001.

Reney was a member of the American Legion Auxiliary and treasurer of the Riverview Tenants Association. She enjoyed playing bingo, riding motor cycles, going to the casino, watching crime shows on TV and spending time with her family and friends.

Memorial contributions can be made to the Ogdensburg Boys & Girls Club or Knight of Columbus.

Condolences and fond memories can also be shared at www.foxandmurrayfuneralhome.com.