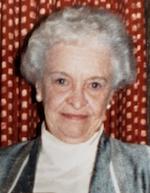 Her funeral will be held at the funeral home on Thursday, August 15, 2019 at 11:00 AM with Gregory Thompson officiating. Private burial will take place in Evergreen Cemetery. A time of food and fellowship will follow the funeral at Lisbon United Presbyterian Church.

Memorial contributions may be made to a charity of one’s choice.

Ilene was born September 17, 1928, in Lisbon, NY and was a daughter of the late, Raymond R. & Marion (Putney) Thompson. She graduated Lisbon High School in 1946 and furthered her education at the Effie Lou Wallace Secretary School in Ogdensburg, graduating in June 1948.

On June 28, 1952, she married the late Charles Burton Payne on the lawn of the Thompson Farm, Lisbon with Rev. Donald T. Kauffman as celebrant.

She was a charter member of Zonta Club, Past President of NYS Commissioner of Jurors Association of the 4th Judicial District. She was also a member of United Presbyterian Church of Lisbon.

In addition to her husband, she was predeceased by a sister, Bette Gannon.

Ilene was proud of her home and her flower gardens. She also enjoyed knitting, baking, reading and precious time spent with her family.