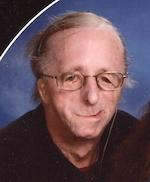 MASSENA – With great sadness, the family of Hugh P. Wing, 74, announce his passing on November 30, 2022, with his loving wife and son by his side.

Hughie is survived by his devoted wife, Mary Jane; his son, Hugh; brother, Peter and Eldonna Wing of Clermont, Florida; sisters, Anne and Patrick Reagan of Punta Gorda, Florida and Barbara Wing and Randy Burnham of Massena; his sister-in-law, Marjorie and Robert Phelix of Mitchell, Indiana; many nieces, nephew, and cousins; and his precious fur babies Sammy and Duke.

Hughie was born on April 5, 1948 in Massena. He was born with Treachers Collins Syndrome which entailed many surgeries throughout his life. With his fathers transfer to Pittsburgh in 1957, he attended St. Vincent de Paul’s School for the Deaf which nurtured his formative strides in life. After a few more transfers between Massena and Pittsburgh, he finished his high school years at Massena Central High School graduating in 1969 and almost immediately began his career with General Motors, transferring to Bedford, Indiana in 1987 and returning to Massena in 2000 upon his retirement.

He married the love of his life Mary Jane Keerd in 1975 and welcomed their son, young Hugh, later that year. The family transferred to Bedford in 1987 where many of his fellow workers became lifelong friends. He was admired for his work ethic and his dry sense of humor.

He was a man of few words, but when he did speak, you listened albeit uncensored! His life had become centered on his family, his “zoo”, his friends and most undeniably the Pittsburgh Steelers! His wardrobe consisted of Steeler attire from head to toe and most assuredly could recount sports statistics with the best. One could be sure his morning routine consisted for sitting in his chair, a pencil in one hand doing the Watertown Crossword Puzzle daily, and in the other hand the never ending cup of coffee.

Lastly, let it be said, his wife Mary Jane was the center of his life as he was hers. And as much as she referred to him as “her little chicken neck” everyone knew the bountiful love that was in that phrase. Their family, big Hugh, Janie, and young Hugh were an entity in their own. All three were survivors and fighters thru all their trial and tribulations. Love “DOES” conquer all!

At his request, there will be no services, but a celebration of life will be held in the summer of 2023. Those wishing to express an act of kindness may do so to the Massena Humane Society in his memory.

Arrangements for cremation are under the care and guidance of the Donaldson Funeral Home, Massena, where friends and family may share memories or offer condolences online at www.donaldsonfh.com.