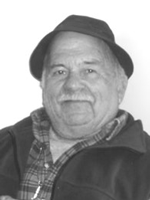 NORWOOD- Hilton H. Hotaling, Sr., 94, formerly of Norwood, passed away on Tuesday, May 3, 2022, surrounded by his family, at the Gouverneur Hospital after a brief illness.

Hilton was born on May 2, 1928, in Parishville, son of the late Cecil and Loula (Champney) Hotaling.

He attended Parishville schools and served in the US Air Force from 1946 until his honorable discharge in 1949.

He married Erleen Cole, the marriage ended in divorce.

He owned and operated B&L Carpentry for many years, and previously operated heavy equipment, logged and drove truck for Bicknell Brothers for several years.

Hilton delivered for the Free Trader from 1986 until 2016 and was known and the “Free Trader Guy” and ran a small engine repair business for many years into his retirement.

Hilton was a jack of all trades and enjoyed small engine repair.

In his younger years he owned horses and enjoyed horse shows and loved auctions.

He is survived by his four children from his first marriage, Hilton Hotaling, Jr. of Morristown; Deborah Perkins of Philadelphia, NY; Susan (Greg) Peck of Pennelville, NY; and Lisa (Paul) Vallance of Lisbon; two children from his second marriage, Lorren (Sally) Hotaling of Montvale, NJ; and Serena (Mike) Moulton of Russell; and three stepchildren, Darsi (Lonnie) Crane of Layton, UT; Quincy Fuller of Norwood; and Clyde Dana Kendrick of Plattsburgh.

Along with many grandchildren, great, and great-great grandchildren; he is also survived by two sisters, Judy Ramsey of Schuylerville; and Linnie (Dick) Bicknell of Parishville; and many nieces, nephews, and cousins.

Besides his wife Linda, Hilton was predeceased by a daughter, Tina Hogle; and his siblings, Shirley Covey, Phyllis Briggs, Welletta Goodnow, Terry Hotaling and Irving Hotaling in infancy.

Donations may be made in Hilton’s memory to a charity of one’s choice.

A graveside service will be held privately at the convenience of the family at Chapel Hill Cemetery, Parishville.

Arrangements are under the care and guidance of the Donaldson-Seymour Funeral Home where memories and condolences may be shared online at www.donaldsonseymour.com.