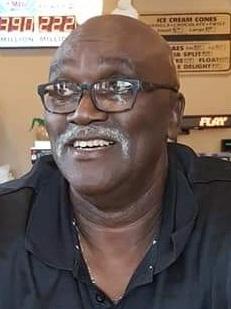 Private Funeral Services for Henry James Boyd, Sr., age 69, of Ocala, FL and formerly of Ogdensburg, will be held at the convenience of the family. Burial will be in Notre Dame Cemetery. Arrangements are under the care and direction of Frary Funeral Home, Ogdensburg. Mr. Boyd passed away on Monday, June 8, 2020, in Ocala, FL.

Henry is survived by his wife, Kathryn (Kim) Boyd of Ocala, FL; two daughters, Jodi Harper and Rebecca Boyd, both of Ogdensburg, NY; step-sons, Emerson Marshall of Kuwait and Kendall Marshall of Buffalo, NY; his four children, Henry Boyd Jr, Eric Boyd, and Angela Lawson of North Carolina and Alesia Boyd of South Carolina. Henry had many grandchildren. Justin Bradley, North Carolina and Madelyn Jean Boyd, Ogdensburg were the last he got to spend time with. Henry is also survived by his sisters, Betty (Walter) Jones of North Carolina, Mary Louise Boyd of North Carolina, and Vernell Gadson of Maryland; sister in law, Mary Ashford of South Carolina, brother in law, Willie Gadson of North Carolina, a brother in Law, Tom Douglas of Ogdensburg, NY, a sister in law, Hassie (Donnie) McCarney of Ogdensburg, NY and sister in law, Carrie (Bob) Pratt of Massena, NY. Henry had many nieces and nephews, to name a few – A special niece, Lillian Mickle of South Carolina, Douglas McCarney and his companion, Kristina Barton, Patrick McCarney, Katelyn McCarney, and Nathan McCarney, Robert Pratt II and James Pratt, Alyssa Douglas, as well as great nephews, Jacob Lafave and Alexander McCarney and two great nieces, Haile Pratt and Kayla McCarney who all had a special place in his heart. He is also survived by his good friends Michael Gebo and Howard Thompson, as well as Sarah Duvall, who he loved like a daughter. He is predeceased by four sisters and two brothers.

Henry was born on December 3, 1950, in Winnsboro, South Carolina the son of Johnny Boyd Jr. and Mary Jane Pearson. He graduated from McCrorey-Liston High School in 1969 where he led his highschool basketball team to three State Championship appearances from 1966 to winning the title in 1969. Henry earned a four-year athletic scholarship to Catawba College in Salisbury, North Carolina where he graduated with a Bachelor’s Degree. Henry achieved an impressive basketball career, with two All-American team selections, earning him a feature in a 1973 issue of Sports Illustrated. Mr. Boyd was also selected in the American Basketball Association Draft by the Philadelphia 76ers. In 1974, Henry was recruited by the National Association of International Basketball for a team out of Paris, France where he played competitively for eight years. He later returned to the United States in 1982 and was picked up by a semi-pro Show Ball team from Long Beach, CA. Mr. Boyd later moved to Ogdensburg, NY, and married Debbie J. (Douglas) Harper on October 5, 1984, at City Hall, with Judge George Silver officiating. She predeceased him on April 11, 2010. Henry worked for a time at the local P&C Grocery store. In 1993, Mr. Boyd began coaching with Mike Gebo for area youth basketball. Henry married Kathryn (Kim) Marshall on July 26th, 2014, at Centenary United Methodist Church in Malone, NY with Rev. Billy Bond officiating.

Henry enjoyed umpiring women's softball, talking on the phone, visiting with friends and family, traveling with Kim, and spending time with his dogs Scarlet and Oreo.

Donations may be made in Henry’s memory to the Ogdensburg Boys and Girls Club, PO BOX 555, Ogdensburg, NY 13669.

A live stream of the funeral services will be made available on our website.