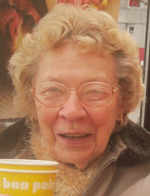 A graveside service will be held on a later date at the convenience of the family. Services are under the care and direction of Frary Funeral Home, Ogdensburg.

Helen was born at home in Pyrites, New York to Anna Kinder Donaleski of Hamburg, Germany delivered with the assistance of her father John Donaleski of Vilnius, Lithuania in Sept. 1923.

She grew up in a family of 12 on a farm there and later in Morristown.

During the war, the smaller family resettled in Syracuse where Helen worked at Pass and Seymour as an executive secretary, waited tables, and did some court stenography in her spare time.

Coming back north after the war to work at her sister’s restaurant, Ace & Ann’s, she was reacquainted with her future husband Vincent E. Rogers.

This time it stuck and they were married in August of 1950.

A year later, she had her first son, Paul.

In 1954, Helen and Vince bought the old school house in Brier Hill.

They set up and ran a restaurant under that name for 16 years.

During this time her second son Ernest was born.

Helen was a member of the Eastern Star of Morristown, sponsored and bowled on a team in Hammond, volunteered and contributed to the local Bullhead supper, church socials, and delivered her meals to the shut in and elderly in Brier Hill during the holidays or during people’s illnesses; all long before meals on wheels.

This was while running the business of offering wedding receptions, banquets and daily meal service at the School House Inn.

When she finally retired in the early 1970’s, Helen and Vince spent summers on the river and winters in Englewood, Florida.

Their river pop up entertaining was legendary with food anytime someone showed up by car or boat.

In Florida, they lent themselves out as surrogate grandparents to whomever needed kids driven to school, watched on the sports field or someone to be there after school who was not afraid of their big dog!

After Vincent passed away in 2002, Helen maintained the river home.

She kept up with a lively crew of “river rat widows” hosting card games, instigating July 4th floats, and gardening there in Morristown.

She spent most winters with her son and partner Barbara in Maine and later in Vermont.

The last few years saw her first at United Helpers Canton where she had a new group of lively widows to play cards with.

Then, at St. Joseph’s Nursing Home in Ogdensburg where the vagaries of living a full and demanding life caught up with her.

She passed peacefully in her sleep probably dreaming of a life well lived.

Online condolences can be made at www.fraryfuneralhomes.com.