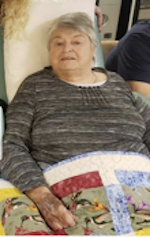 Helen was born in Ogdensburg on November 12, 1939, the daughter of Ernest and Flora (Gibbons) Peterson. Helen graduated from Madrid-Waddington High School in 1959 and married Carl E. Rivers Sr. on August 8, 1959 at St. John’s Baptist Church in Madrid. Carl and Helen lived in Richville since 1970. Helen was a homemaker while raising her family and assisting her husband Carl in operating Carl’s Body Shop in Richville for over 30 years. Helen enjoyed attending church, reading, word search, rummy, and spending time with family and friends.

She is predeceased by her parents, her husband Carl E. Sr.; a daughter, Sarah Louise Rivers who died at birth; three brothers; three sisters; and granddaughters, Heather Rivers, and Cathy Jo.

Memorial donations in the memory of Helen are encouraged to Hospice & Palliative Care of St. Lawrence Valley, 6805 US Hwy 11 Potsdam, NY 13676.

A graveside service will be held on Saturday. May 25 at 11:00 a.m. at Maple Grove Cemetery, Richville with Lee Von Wald officiating.

Arrangements are with the Green Funeral Home, Gouverneur.