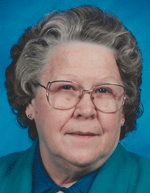 There will be a memorial mass for Helen at a later date at the St. James Catholic Church in Gouverneur, NY. Burial will be private at the Old Hermon Cemetery in Hermon, NY. Arrangements are with French Funeral Home Inc., Edwards. Condolences may be shared online at www.frenchfuneralhomes.com.

Helen worked as a housekeeper for various people in Canton and Gouverneur. She worked as Head Housekeeper for twenty years at St. Lawrence University within the various Presidents’ homes, retiring on October 23, 1983. Helen was a member of the Veterans of Foreign War, Silas Wainwright, Ladies Auxiliary Chapter 6338. She enjoyed camping in South Colton, fishing and bowling.

Donations may be made in Helen’s memory to a charity of one’s choice.