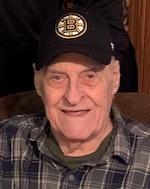 There will be a Celebration of Life held at a later date. Arrangements are with French Family Funeral Home in Star Lake. Condolences may be shared online at www.frenchfuneralhomes.com.

Harold was born on October 30, 1931 in Benson Mines to the late William Henry and Mary Almeda (Myers) Meek. He attended the Oswegatchie School until enlisting in the United States Army in February of 1952. He trained at Fort Devins, was a Private First Class in the Quarter Master Corp. and served in Alaska during the Korean Conflict. He was honorably discharged in April of 1955 and served in the Reserves until April of 1960.

Harold married Shirley Caufield on February 22, 1954 at St. Hubert’s Catholic Church in Star Lake officiated by Father Robert Farmer. Mr. Meek worked for the surface crew and powder crew as a driller for J&L Steel from 1955 until it closed in 1977.

Harold had a passion for watching Boston Bruins Hockey and rooted for any team that beat the Montreal Canadians. He enjoyed Red Sox baseball, sitting in the garage listening to country music and visiting over a beer and watching the birds.

In addition to his parents, he was predeceased by his son, Harold “Harry” Meek, Jr.; and his sister, Ruth Meek Moore.