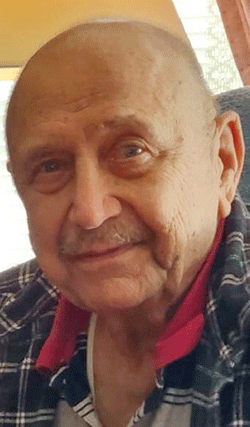 MASSENA -- Halbert “Hal” F. Oney, 82, passed away on Monday November 28, 2022 at St. Joseph’s Hospital in Syracuse. A funeral service will be held on Friday December 2, 2022 at 1 pm at Frary Funeral Home, 60 Maple Street, Massena with Rev. Mark Reilly officiating, calling hours will be held previous to the service from 11 to 1.

Hal was born on March 14, 1940 the son of Halbert L. and Edith (Keller) Oney. He graduated from Massena High School and attended SUNY Potsdam where he earned his Bachelor’s degree in teaching. He was employed by Madrid-Waddington Central School where he was a science teacher for thirty one years, retiring in 1995. On February 14, 1976 he married Marcia McCready at the Scotch Presbyterian Chipman Church.

He is survived by his wife and two children, a daughter Michaela and a son Andrew, both of Syracuse, two grandchildren, Amy and Ashley Bubb. A sister Marilyn (Keith) Bain of Massena, two nephews Brian Bain of Colorado, and Jack Bain of Massena. He is predeceased by his parents.

Hal enjoyed anything sports related, for thirty years he was an official for Section 10 sports in the north country, he officiated soccer, girls basketball, baseball, girls softball, and he also officiated many college soccer games. He also enjoyed playing golf and was a member of the Massena fast pitch softball league. Hal had an uncanny ability to see someone whose game he officiated from years past and know them by their name and what position they played. Hal also enjoyed spending the winter in Myrtle Beach since his retirement in 1995.

Memorial donations in Hal’s memory may be made to the Gouverneur Business Womens Breast Cancer Fund, PO Box 64, Gouverneur, NY 13642.

Online condolences may be shared with the family at www.fraryfuneralhome.com