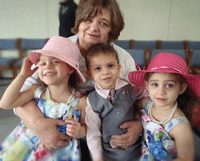 MASSENA — The family of Gloria J. Lamendola, age 72, are saddened to announce her passing on Sunday September 18, 2022 at CVPH Medical Center in Plattsburgh, NY.

A Mass of Christian Burial will be held at 1:00 PM on Thursday September 22, 2022 at the Church of the Sacred Heart with Rev. Mark Reilly officiating.

Born on May 28, 1950 in Morristown the daughter of the late Howard J. and Florence N. (Bennett) Ross.

On August 9, 1975 she married Loren Lamendola at Dickinson Baptist Church.

Through her many health challenges that afflicted her all of her life prompted her to become an Intensive Care nurse.

Gloria was immensely proud of her work as a nurse for 30+ years, and retired from Massena Memorial Hospital where she spent the majority of her career as an LPN.

She was a talented painter, knitter, and jewelry maker.

She was an expert horror and sci-fi enthusiast.

She was a self-taught Mrs. Fix-it.

She'd open up broken gadgets, and appliances, and fix them on her own.

She enjoyed fishing, and camping.

She and her eldest daughter Carina, are forever bonded through Carina's liver donation in 2001 which made them forever a part of each other.

She was forever thrilled that her hero, Twilight Zone creator Rod Sterling named one of his characters after her in his script for the made-for-television drama film, A Storm in Summer.

Gloria's strongest character traits were her unconditional ability to both love, and forgive.

Gloria was the oldest of 13 children.

She was predeceased by her loving brothers Howard Ross and John Ross.

In lieu of flowers, please spend extra time with your grandchildren in honor of Gloria.

Family and friends are encouraged to share condolences online, pictures and memories by visiting www.PhillipsMemorial.com