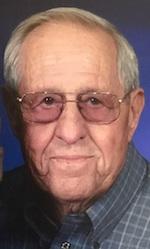 Born in Pierrepont, NY on September 22, 1925 to the late Bert J. “Paul” and Edith Paro Robert, George attended school in Pierrepont and later enlisted in the U.S. Army. George was wounded at the Battle of the Bulge and was listed as missing in action for a period of time. He later received the Purple Heart, the European African Middle Eastern Campaign Medal, and the World War II Victory Medal. Upon his return home, he married Bernice Campbell on September 3, 1946.

George worked for the Operating Engineers Union, where he eventually attained the position of Equipment Superintendent for Warren Bros. in Syracuse.

George was a dedicated member of St. Patrick’s Church. He loved the outdoors, especially hunting and fishing, and was a member of the Bruner Hill Hunting Club and the Birch Brook Hunting Club, and no one could tell a better hunting story. George was also a past member and Chief of the Colton Fire Department.

Memorial donations in George’s name can be made to the Wounded Warriors Project at www.woundedwarriorsproject.org.

Memories and condolences may be shared online at www.buckfuneralhome.com . The Buck Funeral Home is serving the family of George A. Robert.