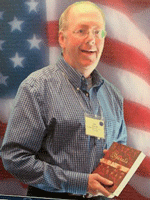 GOUVERNEUR - Gale Charles Ferguson, 72, passed away on Saturday, July 23, 2022 at University Hospital in Syracuse and donated his body to the anatomical gift program at SUNY Upstate Medical University.

A celebration of life will be held on Sunday, July 31st from 1:00 to 4:00 pm at the Gouverneur Community Center.

Arrangements are with the Green Funeral Home, Gouverneur.

Gale was born on June 1, 1950 in Gouverneur, the son of Charles and Doretha (Reed) Ferguson.

He graduated from Gouverneur High School in 1968 and attended Rochester Institute of Technology for one year.

Gale returned to Gouverneur to help out at the family business, Ferguson Printing Company, following his father Charlie’s illness.

He bought the business in 1980 and provided printing services for the community for 42 years.

Gale was recruited by Retha Brown as a board member specifically to serve as chair of the Loft Renovation Project of the Gouverneur Public Library.

He created and implemented the library’s fishing tackle and snowshoe lending program.

The Sylvia Lake Association was another special interest of Gale, and he served several years as its president.

He was active in the trout stocking program, water level management, providing a boat for milfoil management, initiated the the first summer concert with the “Original Yanks”, and this year, 2022, marked the 40th year for the Charlie Ferguson Memorial Rock Bass Derby which Gale organized and funded.

Fishing with Fergie was a local cable access fishing program on WKLTV, featuring many outings with local residents on Sylvia Lake and Lake Ontario.

Ferg later enjoyed 18 summers fishing out of Henderson Harbor, first aboard his 19’ Grady White “After Ours” and eventually acquired a 26’ Penn Yan inboard.

Hundreds of friends and family were introduced to walleye and salmon fishing aboard these boats.

Explorer Post #421 was organized by Gale and sponsored by Gouverneur PBA.

This coed group focused on sports and photography.

Ferg served as the chief dishwasher operator at the Methodist Church senior luncheons every Friday for over 10 years.

Among his many honors are the 1978 VFW Citizen of the Year, 1993 Gouverneur Chamber Award of Merit, Gouverneur Rod and Gun Club life member, past chairman of the Village of Gouverneur Recreation Committee, the St. Lawrence County Private Industry Council, the St. Lawrence County Youth Recreation Committee, the 1993 Ducks Unlimited distinguished service award recipient, and the Delta Kappa Gamma Red Rose recipient of 2010.

He was a 25 year perfect attendant, 5 time President, and Paul Harris Fellow recipient of the Gouverneur Rotary, created and implemented the “Flamingo Project” which generated $18,000 for local food pantries and cancer programs, was a strong advocate of the Dean Oratoricals and Pinewood Derbies.

Ferg was vice president for 22 years of the Gouverneur Chamber of Commerce which he was also a director, emcee for annual banquet, Flag Day and Christmas parades, and served on the Winter Blast Committee.

Gale supported the Gouverneur Foundation as a 38 year member of the board of directors and was responsible for soliciting a number of the largest contributions.

He joined the Gouverneur Elks lodge in June 1971, was a life member, co-chair of membership and approval committees.

Gale also served the Gouverneur Board of Education and was chairman of the annual meeting for 28 years.

Gale is survived by his companion Susan Emrich of Gouverneur, his sisters Kathryn (Edwin) Gillett of Constableville, and Charlene Oukes of Rochester, nieces, nephews, cousins, and his loyal employee of 35 years Jimmie Backus.