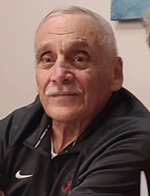 CANTON — Frederick F. “Fred” Rycroft, 77, of County Route 21 passed away at his home while under the care of his loving family on Saturday, September 24, 2022.

A celebration of life will be held on Saturday, October 8 from 1:00 to 3:00 PM at Sergi’s Banquet Hall in Canton.

Fred was born November 28, 1944 in Malone, NY and was a son of the late Girard and Margaret (Scarfone) Rycroft.

He graduated Hugh C. Williams High School in Canton in 1962 where he played football, basketball and ran track.

He furthered his education at St. Lawrence University graduating with a BA in Business Management.

While at SLU he played football all four years.

The couple were married 54years and raised three children.

Fred retired from SUNY Canton as Director of Physical Plant after 38 years of service from Dec 1968 to Jan 2002.

After retirement he worked as clerk of the works for SLU for one and a half years.

In addition to his wife Deb of Canton, he is survived by his children and their spouses, Jon (Stacy) Rycroft of Iowa, Jennifer (Scott) Dean of Canton and Greg Rycroft of TN; nine grandchildren Allison, Jessica, Mackenzie Carson and Carter Rycroft, Ryan and Hunter Dean and Jack and Emalyn Rycroft; three great-granddaughters Amelia, Madison and Abigail; a brother Victor (Kathy) Rycroft of Morley; and a sister Earla (Don) VanKleeck of Boyceville, NY.

He was predeceased by a granddaughter Bethany Dean.

Fred was a member of Weller Mountain Club and enjoyed hunting, fishing and 4-wheeling.

He was a golfer; he was involved with ISA at SUNY for athletics from Aug 2, 2011 to June 1, 2019 – scorekeeper and stats at SUNY for basketball and lacrosse; coached football at SUNY under Lou Sabin; and was an assistant football coach at Canton High School.

Fred will also be remembered for writing a couple novels about growing up in Canton.

On the same day of his passing, Fred was inducted into the Canton High School Sports Hall of Fame.

Memorial contributions are suggested to Hope Lodge in Burlington, VT or to Hospice and Palliative Care of St. Lawrence Valley.

Lawrence Funeral Home & Cremation Services have been entrusted with Fred’s care and arrangements.