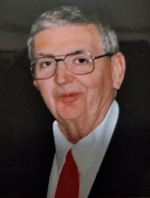 A Beloved Husband, Father and Grandfather.

He is survived by his wife of 50 years Lee Perrin of Ogdensburg NY, his daughter Kelley Perrin Cummings, husband O’Neil Cummings and his granddaughters Ashlyn and Aleena Cummings of Latham, NY.

An advocate of Agriculture throughout his life, Fred had an Associate Degree in Animal Science from SUNY Cobleskill and was named outstanding Senior in Animal Husbandry.

He was the keynote speaker at the NYS Guernsey Breeders Convention.

Youth activities were always a huge part of his life.

He was the chapter FFA President and a county officer.

Later during his Farm Bureau career, he was awarded the Honorary FFA Empire degree and the FFA Honorary American Farmer Degree.

His youth activity in 4-H was extensive where he won many local and state awards.

Fred retired in 2019 after 40 years as a staff member of the New York Farm Bureau.

He spent the first half of his career as a Field Representative and the second half as Director of Field Services, working in the State Headquarters in the Albany area.

Fred served as Town Councilmen for the Town of Oswegatchie.

He was very active at St. John’s Church in Ogdensburg, where he served as a layman on the alter, was a member of the vestry, and a church warden.

Fred’s commitment to Family, Faith and Farming will be celebrated on Tuesday June 28, 2022.

A Funeral Service will be held at St. John’s Episcopal Church in Ogdensburg, NY at 1:00pm. Burial to follow.