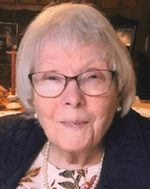 She met Roland while attending college and they married and started their family.

Evelyn helped her husband Roland with the family newspaper business, The Tribune Press in Gouverneur, NY.

Family recalls stories of her even driving the one-ton truck for the Tribune Press delivering circulars all over the Southern Tier and Northern Counties of New York.

Evelyn worked as a certified teacher’s aide from 1969-1989 for the Gouverneur Central School System and as a Certified Diet Workshop Instructor from 1968-1975.

She was an active member of the Order of the Eastern Star and served as Deputy District Grand Matron in 1990. Funeral services will be held on Saturday, January 28, 2023 at 10:00 a.m. at the Estey, Munroe & Fahey Funeral Home, 15 Park St., Owego, NY with Pastor Daniel Crane of the South Apalachin Baptist Church, officiating.

Burial will be in the Potsdam Cemetery, Potsdam, NY. Condolences may be made to Evelyn’s family at www.emfaheyfuneralhome.com.