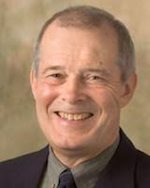 Eric F. Thacher, 83, passed July 1, 2020 at his home in Potsdam. He was preceded by his wife, Susan, in 2010; and is survived by his two sons, Jeff of Denver, CO and Andy of Los Angeles, CA, both Potsdam High graduates; his daughter-in-law, Kelly; his cousins, Nancy Megan of New York, NY and Ann Foster of Vancouver, Washington; loving sister-in-law, Karen Handley; and brother-in-law, Peter Worley; four nephews and nieces; and many younger cousins.

Eric was born in 1936 in Portland, Oregon, Eric's mother Elizabeth passed while he was a child, and his father, Eric Forsta, fought in WWII in a bomber crew based out of England. So Eric was adopted by his maternal grandparents, Goodwin and Jane Thacher, both teachers in Eugene, OR. Jane was a concert pianist and Eric was raised with the sound of her music filling the house.

Eric graduated from the Naval Academy in 1958 and was assigned to the USS Ingraham. He later joined the Navy's elite nuclear submarine fleet in the first crew of the USS Henry L. Stimson, where he served for years until he retired from the Navy to raise his family.

As his sons were being raised, he earned a degree in Nuclear Engineering from MIT and worked for the aerospace industry for years, then made a decision to teach. To that end, he received a doctorate in Mechanical Engineering from New Mexico State University and became a professor at Clarkson University (then Clarkson College) in Potsdam, where he taught from 1980 to 2005. A colleague described him as "an engineer's engineer", and his teaching legacy lives on to this day in the many hundreds of students he guided.

Additionally, Eric published numerous scientific papers, two books, and was an avid painter and art enthusiast. He and his wife were active in the St. Lawrence Arts Council, his church, and many community organizations and activities.

But most importantly, he was an extraordinarily compassionate, thoughtful, man. A very patient and loving husband and father. Unfailingly kind, loyal, and attentive to everyone he met. His wisdom was always welcome, as was his gleeful love of puns and wordplay. He rejoiced in the accomplishments of others and possessed a childlike approach to life - in the best possible way.

In lieu of flowers, the family invites the community to make a donation to one of the organizations Eric was focused on at the time of his passing: The Orchestra of Northern New York, the Potsdam Public Museum, and the Southern Poverty Law Center. Thoughts, condolences and fond memories may be shared online at www.garnerfh.com.