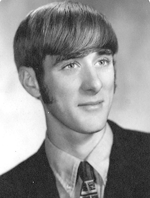 He was born on October 14, 1954, in Massena to the late Floyd and Armedia (Jenkins) Clookey; where he grew up as the youngest of four in Chase Mills, NY.

Arrangements are under the care and guidance of the Phillips Memorial Home, 28 Clinton Street, Waddington, NY.

A memorial service will be held at 7:00 P.M. at the funeral home with Pastor Judy Van Kennan presiding.

Together they raised their kids in Madrid, NY for 20 years before parting ways.

In his teenage years he worked at McAvoy's Farm in Madrid until his high school graduation.

Shortly thereafter, he began a forty-two-year career at St. Lawrence University where he started as a campus mailman and by 1985 was a fixture on the grounds crew.

Duane was a dedicated grandfather who loved watching his grandchildren play sports, perform in music concerts and any activities they were involved with.

During his spare time, Duane was an avid caretaker of his house and yard.

He enjoyed the pristine upkeep of mowing, of planting trees and shrubs, and splitting firewood.

Freezing temperatures or blizzards, there was no limit to his contributions.

His witty humor and charm were worn on his sleeves.

He could always provoke a good laugh, and then some.

He had an affinity for animals, his door always open to the family dogs.

Duane's family was the apple of his eyes...His adoration for his daughter, Danielle was beyond words.

This humble and one-of-a-kind man will be deeply missed.

His memory will live on in the hearts of those he touched.

Family and friends are invited to share online condolences and memories by visiting www.PhillipsMemorial.com