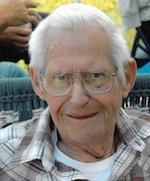 NORTH LAWRENCE -- Mr. Douglas Victor Richards, 81, passed away on Thursday, August 1, 2019 at the Alice Hyde Medical Center in Malone with the love and comfort of his family at his side.

Doug was born in Moira on December 15, 1937 to the late Vernon and Marjorie (Riggs) Richards and attended Moira High School. On April 12, 1958 he married Mabel H. Jenkins at St. Mary’s Church in Brushton. They shared a devoted union together raising their family and farm; true companions for 56 years. Mabel passed away on December 4, 2014.

In the early years Doug worked construction for the Labor Union. Then together with his wife, he owned and operated his dairy farm in North Lawrence, retiring after 40 years.

Doug was a dedicated family man whose constant strength never faltered; always being present for those in need. He loved hunting, fishing, and always looked forward to his trips to the casino to play Quick Hits.

He was a member of the SRF Sportsman’s Club and one of the founding members of the Standing Tall Hunting Club where he also served as the first and former president for many years.

Visitation will be Tuesday from 2-4PM and 6-8PM and Doug’s Funeral Service will be celebrated on Wednesday August 7 at 11:00 AM at the Hammill Funeral Home in St. Regis Falls. Burial will follow at Sand Hill Cemetery in Dickinson.

Memories and condolences can be shared with his family at www.hammillfh.com.