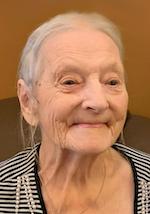 A Funeral Service for Dorothy will be held 11:00 a.m. Wednesday December 7, 2022, at The First United Methodist Church in Waddington with Pastor Donna Fitchette. Burial will be held in Louisville Community Cemetery at the convenience off the family.

Dot, as she was fondly known as, was born the daughter of Lucy and Walter Cardwell.

For many years the family was involved in drag racing and became a partner in Naperville Drag Strip in Naperville, Quebec, Canada. Dot also raced her turquoise Plymouth Barracuda. She loved beating the men she raced, but she got a kick out of beating the French Canadian men the most.

Dot also enjoyed fishing, especially on Lake Ontario. Dot and Jim would park their camper in and around Oswego and Henderson Harbor area. They owned a large white boat that could be seen along the shores of Oswego to Henderson, NY.

Dot and Jim built their home in Waddington where they moved into in 1989. She was very active in the Waddington Rescue Squad, Tri-Town Senior Citizens and spent years holding offices and also the Waddington United Methodist Church. She was an avid garage sailor and loved thrift stores.

She is survived by her children, Janice and Bill Arquiett of Waddington, NY, Dale Moulton of Aura, CO; her grandchildren, Robbie Arquiett, and Scott Moulton; great-grandchildren, Jordan, Connor, Aiden, Reid and granddaughter, Addie Arquiett. She also had several nieces, nephews.

Online condolences, memories and pictures may be shared with the family by visiting www.PhillipsMemorial.com.