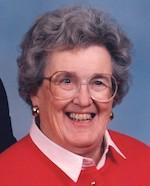 POTSDAM -- Doris C. (Arbogast) Frazer passed away on May 14, 2019 at the age of 95. Doris will be remembered as a very fun-loving and active woman. She was married to her outgoing husband, J. Ronald Frazer, from 1948 until 2011 when he predeceased her. She is also predeceased by both of her siblings, Robert Arbogast (Grace) and Carol (Arbogast) Forster (Jack); and many good friends. She is survived by their five children, Kathy Frazer Winsted and husband Bill, Yorktown, Patti Frazer Lock and husband Robin, Hannawa Falls, Michael J. Frazer and wife Edith, Canton, Judy Frazer Graham and husband Mark, Standish, ME, and R. Bruce Frazer and wife Joanne, Nashville, TN; thirteen grandchildren, and ten great-grandchildren.

She rocked it as valedictorian of Nepean High School in Ottawa Canada in 1941, then worked at the Australian Embassy in Ottawa and even attended Queens University in Kingston Ontario before love took over. She married Ron Frazer, her high school sweetheart and followed him to Ames, IA where Ron completed a doctorate at Iowa State University. The eldest two of their five children were born in Ames before they moved to Potsdam in 1953 when Ron began his long tenure as a faculty member at Clarkson University.

Doris completed her bachelor’s degree at SUNY Potsdam. She spent the fifties producing children, and the sixties happily raising them. Once her kids started moving on to college she created and ran the Technical Information Center at Clarkson, was Conference and Special Events Coordinator at the University, and worked as the New York State Coordinator for Elderhostel (now Road Scholar) until her retirement in 1989.

Doris was exceptionally bright, a born leader and a person of great integrity. She was widely known in Potsdam for her leadership and volunteer activities with organizations such as The League of Women Voters, The Potsdam Zoning Board, and the Methodist Church. Her legacy to Potsdam also includes the creation of its first Nursery School in the 1950s.

Throughout their many years in the Potsdam area, Doris and Ron were avid fans of both the Men’s and Women’s Hockey teams at Clarkson. Doris is especially fondly remembered as “Mrs. Coach” by the members of Frazer’s Blazers, the first women’s hockey team at Clarkson. Doris helped Ron establish and manage Frazer’s Blazers from 1974 through 1983, She was recently recognized by Clarkson University for her role in creating that women’s hockey organization.

Doris and Ron travelled extensively, but their favorite place in the world was the wonderful home they built on the Raquette River in Hannawa Falls. In 1980 they moved there from their longtime family home at 18 Grant Street, Potsdam, and Doris dearly loved their place on the river. She was fortunate to be able to remain in her home until her death.

Doris was extremely active and friendly. She enjoyed a wide circle of friends through golf, bridge, and ski club, as well as through her ties at Clarkson and her volunteer activities. She was always enthusiastic about meeting new people and experiencing new things. With her husband, she created an environment of adventure and joy for her children and grandchildren. She remains a beloved role model for her family members, who will remember Mom/Grandma for her fun-loving attitude, her resilience, and her integrity.

A memorial service celebrating the life of Doris Frazer is planned for this summer. For those wishing to do so, donations may be made to the Doris Frazer Memorial Fund, Development and Alumni Relations, Clarkson University, Box 5515, Potsdam, NY 13699.

Arrangements are with the Donaldson-Seymour Funeral Home, Potsdam, where memories and condolences may be shared online at www.donaldsonseymour.com.