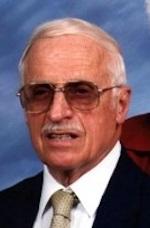 OGDENSBURG -- A Mass of Christian Burial for Donald F. Murray, age 92, will be held at 11:00 a.m. on Wednesday, August 7, 2019 at St. Mary’s Cathedral with his son, Rev. Steven M. Murray officiating. Burial will follow at the Notre Dame Cemetery with military honors.

He was predeceased by his wife, Eleanor in 2015; a son, Thomas in 2014; a sister, Margaret Austin; four brothers, Paul, Thomas, Robert & James Murray, and a daughter-in-law, Sue Ellen (Hennigan) Murray.

Donald was born on December 8, 1926 in Ogdensburg, NY, a son of the late Frank & Eva (Shattuck) Murray. He graduated from St. Mary’s Academy and enlisted in the US Navy from 1944-1945. He married Eleanor Y. LaRock on September 21, 1948 at Notre Dame Church with Msgr. A.D. Charbonneau officiating.

Donald worked for 38 years at the St. Lawrence Psychiatric Center as their principal engineer and also operated a scrap metal business.

In his younger years, he was a pitcher for the local semi-pro baseball team with his siblings and enjoyed organizing pickup softball teams for area youth on Pleasant Lake in the summer. His passions were gardening, the Rutland Railroad and its history, telling jokes, socializing with friends at local establishments, spending time at his camp on Pleasant Lake, traveling and being with his family.

Memorial contributions can be made to the Notre Dame Heritage Fund, 125 Ford Avenue, Ogdensburg, NY 13669. Condolences and fond memories can also be shared at www.foxandmurrayfuneralhome.com.