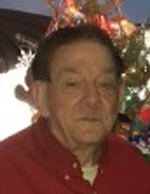 CANTON — Donald E. Adams, 86, of Canton died peacefully on Friday, September 23, 2022 at the home of his daughter Danielle LaRue, while under the care of Hospice and Palliative Care.

Donald farmed for Bob and May Sweet in Canton.

He worked for Sovie’s Ford as a salesman and Mechanic for many years.

He worked for Wonder Bread and later had his own Shell Service Station in Potsdam.

When he was working the farm, he enjoyed horseback riding, he loved cars and cooking.

His chili was often the favorite in many chili cook-offs.

In his younger years, Don enjoyed dancing and playing in shuffleboard tournaments.

In the last several years, he enjoyed visiting with friends and acquaintances at The Stadium or the VFW Post.

Contributions in lieu of flowers may be made to the American Heart Association; PO Box 840692, Dallas, TX 75284 or online at www.heart.org.

Arrangements for Donald E. Adam are under the care of the O’Leary Funeral Service of Canton.