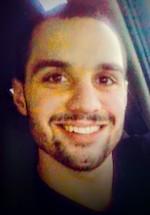 DeCodie T. Adams was born on September 18, 1991, in Ogdensburg, New York. He was the son of John A. Adams Sr. and Teresa M. Brenno. He was a graduate of Ogdensburg Free Academy and the Southeast Lineman Training Center. He worked as a Lineman for Cable Services Corporation of WIlliamsburg, PA.

Codie’s greatest joy in life was his son Hayes, whom he would spend as much time with as he could, he was a proud father and his son was his best friend. Codie enjoyed fishing, hunting and spending time at camp with his dad and brother and he always enjoyed spending time with his friends and family.

In lieu of flowers, the family respectfully requests donations in Codie’s memory be made to the trust account of Hayes Adams c/o North Country Savings Bank 401 Caroline Street Ogdensburg, NY 13669.

Online condolences may be made at www.LaRuePitcher.com.