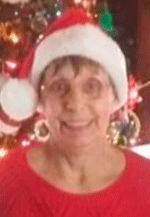 NORTH LAWRENCE - Mrs. Dawn E. (LaBrake) Judware, 68, gained her heavenly wings on Sunday, June 26, 2022, at the University of Vermont Medical Center in Burlington, comforted by the love and support of her family.

In keeping with Dawn's wishes, there will be no calling hours and a graveside service will be held at St. Lawrence Cemetery in the near future.

Dawn was born in Malone on January 7, 1954, to the late Stanley and Rita (Dupra) LaBrake and graduated from Franklin Academy.

A detailed and hard worker, Dawn worked in housekeeping for several years, first at the Highland Nursing Home in Massena, then 16 years at LBSH Housing in Brasher Falls, then four years at Canton-Potsdam Hospital. Lastly she was employed at the Akwesasne Mohawk Casino.

She had a vivacious and spunky spirit that was often witnessed during rowdy card games around her table. She was passionate about maintaining connections and was known to be the "glue" of the family. Her home often smelled of pumpkin rolls or freshly made donuts. Christmas was always in her heart and her love for her family was immeasurable. She especially enjoyed making crafts with her grand babies.

Dawn was predeceased by her husband Robert Judware who passed away on May 2, 1998.

In lieu of flowers, donations can be made to local groups that support awareness for those with autism or special needs.