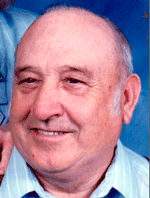 Clint was born on July 11, 1935 in the Town of Macomb, a son of the late Ralph D. & Edna M. (Bailey) Young. He attended country schools and Morristown Central for his education. He was first married to Betty L. Young until her death and was later remarried to Ellen Woodward on June 11, 1988.

During his career he worked for Cives Iron, the St. Lawrence Seaway as a crane operator, and became the owner and operator of his own farm on the Mitchell Road in Macomb, where he built his home and raised beef, pork and chicken’s. He was often referred to as “Little Farmer” on his CB handle. Clint was a jack of all trades, and juggled multiple jobs at once to included being a butcher, ran his own construction business and worked for the Town of Macomb. He also had a great passion for auctioneering, and in later years was an avid auction goer.

Clint was a member of the Macomb “Odd Fellows” an honorary member of the Morristown Fire Department and while wintering in Florida, was a member of the Red Rose Band where he enjoyed playing and singing at nursing homes and charity and church functions. Clint & Ellen summered on Black Lake, with the love of the lake bringing him much joy. He spent his whole life fishing and having family & friends down for fish fries and singing with the little ones.

Memorial contributions can be sent to Hospice and Palliative Care of St. Lawrence Valley or the Morristown Volunteer Fire Department. Condolences and fond memories can also be shared online at www.foxandmurrayfuneralhome.com.