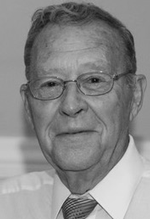 A private memorial service will be held for the family with Canton VFW #1231 Honor Guard providing Military Honors.

A memorial gathering will be held on Thursday, September 29 from 2:00 to 5:00 PM at the Canton VFW #1231, Gouverneur Street, Canton for friends and family to share stories and reminisce the joy and love Cliff had for life and family.

He graduated from Canton High School in 1950 where he enjoyed playing sports and was the Class President.

Cliff proudly served in the US Navy during the Korean Conflict from 1950-1954.

After his honorable discharge he worked on the construction of the St. Lawrence Seaway, the Prescott-Ogdensburg Bridge and the Niagara Paper Projects, and other employment opportunities.

After retirement he worked as an assessor for the Town of Pierrepont for several years as well as part-time at the Community Bank and R.B. Lawrence Ambulance.

On July 9, 1955 he married Carol Jean Latimer in the Crary Mills Church.

The couple were happily married 67 years.

He was predeceased by two sisters Mary LaDuke and Helen Joan Streit.

Cliff was a member of a number of clubs and organizations including: the Masons- Consistory Member of Syracuse and Norwood; Media Temple, Watertown, Scottish Rite of Syracuse and Norwood, St. Lawrence Lodge #111 F & AM where he was Master in the 1985 then Grand Director of Ceremonies of NYS and member of Order of the Eastern Star, Empire 68 and Asst Scottish Master in 1970's.

He belonged to Clear Pond Hunting Club where he was Secretary Treasurer for many years; Canton Sportsman's Club; Crary Mills Church; Lifetime Member of Canton VFW #1231; he coached Pee Wee Baseball, supported Boy Scouts and played co-ed softball for a number of years.

Although never striving to be the center of attention there was nothing more he loved than being with family and friends and enjoying their company: husband, father, grandfather, friend...a wonderful man to have had the opportunity to love and know.

In lieu of flowers, contributions in his memory to Pierrepont Volunteer Fire Department and EMS would be greatly appreciated.