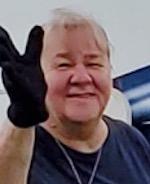 LISBON -- Cheryl M. Sawyer, 64, passed away on Tuesday, November 22, 2022, at Claxton-Hepburn Hospital in Ogdensburg. She was also called “Sherry” to her dad, mom, and siblings.

There are no funeral services and arrangements are with the Green Funeral Home, Gouverneur.

Cheryl was born in Watertown on December 14, 1957, the daughter of Francis and Betty (Patnode) Hoffman.

The couple enjoyed camping, especially at Coles Creek, and Cheryl also liked cooking and spending time with her family, especially her grandchildren and great-grandchildren.

Cheryl had worked for Ames Department Store chain for 14 years and then for Walmart for 27 years.

Sherry is predeceased by her parents; her son, Christopher Sawyer; her grandsons, Travis and Dylan Sawyer; her brother, Michael Hoffman; her-in-laws, Cecil and Loretta Sawyer.

The family of Cheryl would like to thank Claxton-Hepburn Medical Center Critical Care Unit and especially Nurse John for the care and compassion received.