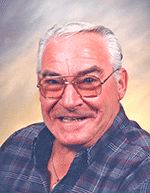 MADRID -- A memorial service and burial for Charles R. Cameron, 86, will be held at a later date. Charles will be buried at St. Mary’s Cemetery. Charles passed away Thursday morning (June 11, 2020) at his home surrounded by loving family.

He was predeceased by a brother Wayne Cameron and children Mary Cameron, Kim Louise (Davis) Schumann, and Nichole Crystal Davis.

Charles was born on March 18, 1934 to the late Charles and Marion (Randall) Cameron in Potsdam, NY. He graduated from Potsdam Central School and went on to continue his education at SUNY ATC, graduating with an electrical degree. After graduation, he served in the United States Army, serving during the Korean War. After his honorable discharge he returned home, Charles then began his 38-year career with Niagara Mohawk retiring as a supervisor in Watertown.

He was active with the American Cancer Society, enjoyed raising Arabian horses, hunting and snowmobiling. Charlie and Judy lived in Parishville on Sterling Pond in the summers and wintered in Melbourne, Florida.

Condolences, thoughts and fond memories can be seen and made online at www.garnerfh.com.