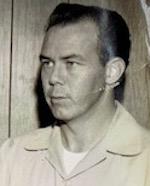 A graveside service will be held on Tuesday, May 4 at 11:00 a.m. East Riverside Cemetery, Gouverneur with Martha Helmer, pastor of DeKalb Junction United Methodist Church officiating. Arrangements are with Green Funeral Home, Gouverneur.

Carlton was born on November 18, 1941 in Gouverneur, the son of the late Charles and Verna (Hunter) Stowell.

Carlton graduated from Gouverneur High School and attended college for a year in Boston. He decided to leave college and pursue a career in the military. Carlton enlisted in the United States Air Force which he served in for 14 years before retirement with a honorable medical discharge. He had been stationed in Guam and Vietnam. Upon retirement, he was recruited by the FBI to start with a clerical position and move up thru the ranks. He lived out his remaining days living at Cambray Terraces in Gouverneur.

He enjoyed some hunting and fishing, listening to music, and had collected quite a selection of albums and 45’s. Carlton loved to play his guitar and had played in a few local bands.

A marriage to Pat Halstrom from Texas ended in divorce.