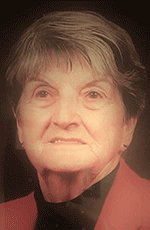 Calling hours will be held on Monday, July 15, 2019 from 4-7 PM at the LaRue & Pitcher Funeral Home. Burial and funeral services will be private.

Beverly Jean Hazelton was born on September 25, 1931, in Gouverneur, NY. She was the daughter of the late Robert and Harriet (Bailey) Simmons. On February 9, 1950 she married Roy Hazelton in Hagerstown, Maryland. After 60 years of marriage, Mr. Hazelton died on March 1, 2010. Beverly was a Homemaker and tended to the most important job of raising her family, she also was a care provider (Nanny) for many families in the local area. Beverly enjoyed spending time with her family and grandchildren. She was currently the oldest member of the First Baptist Church in Ogdensburg, New York.

She is predeceased by several brothers, Isaac, Gene, Gary and Robert.

Donations in her memory can be made to the Richard E. Winter Cancer Treatment Center in 5 Lyon Place, Ogdensburg, NY 13669. Online condolences can be made at www.laruepitcher.com