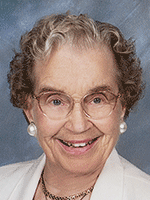 Betty was born in Watertown, NY on February 6, 1922, the daughter of the late Dr. & Mrs. G. Harold Cole. Music was a very important part of Betty’s life. She took piano lessons at an early age and was an accomplished pianist when she graduated from high school in 1939. She entered the Crane School of Music in Potsdam in 1939 continuing piano in music education. While in practice teaching, she met and later married Merton Evans of Norwich, NY in January 1942. This interrupted her music education. During their marriage, they raised their three children and worked at farming or farm related jobs for 58 years together.

In those years, they lived in various places. In Sennett, NY, they owned and ran a general grocery and feed store for 5 years. Then they moved to Homer, NY to own and operate a chicken farm and later a dairy farm for a period of five years. During this time, Mert worked for a Dairyman’s Cooperative, which led the family to Newark, NY. Mert continued to work for the Dairy Coop. Betty went to work at the Newark State School where she worked in the Occupational Therapy Department and then as a teacher. She used her piano training by playing for minstrel shows put on by the patients. She also played piano as well as a pump organ for religious services for the Jewish, Protestant and Catholic Faiths. They lived in Newark for 10 years. While in Newark, Betty re-entered college at Crane. Betty and two of their children commuted to Potsdam from Newark every week. Ginny, the older daughter, stayed in Newark with Grandma Cole. Betty and Ginny graduated together in 1961. Ginny graduated from Newark High School and Betty from Potsdam-Crane with a B.S. in Music Education. She continued her education by attending summer school and earning a M.S. in Elementary Education.

In 1961, the family moved to Canton, NY and settled on a farm. Mert founded a Dairy Cooperative called Allied with local farmers. Betty took Special Ed. Courses thru Syracuse and Potsdam and earned a M.S. in Special Education. She became a teacher in Special Education and taught at Canton until she retired in 1980.

During those years, the farm expanded and they owned 10 farms. On those farms were 3 milk houses. It became Betty’s job to paint each milk house during summer vacation. On the home farm, the milk house was painted bright yellow – Betty’s choice. The others were painted white. In the first summer of operation, the paint all washed off during milking and had to be done over. That year, Betty had help painting the parlor so it would be dry before milking time. The Coop expanded to become Allied Federated Coops with more than 30 total coops. Their children all received college educations.

The family enjoyed camping and traveling, first with a trailer, then with a motor home. Mert and Betty travelled extensively with their motor home and with travel tours at home and abroad.

Mert and Betty’s goal was to work hard, invest wisely and give back to society. They both did that by giving scholarships to students from each of their colleges and donating to various charities. Thru the years, Betty used her music by playing the organ in various churches where they lived. After Mert died in 2000, Betty continued to play the organ in the Methodist Church in Old DeKalb.

In the church family, Betty met Ken Masters. After Ken’s wife died in 2003, Ken and Betty became close friends and eventually became companions. They enjoyed life together and did things together that neither on could or would do alone. Betty’s family, including her grandchildren and great grandchildren became an integral part of their lives together. Betty came to be called “Music Grandma” and was noted for her pumpkin bread.

Betty continued to enjoy donating to various charities, which expanded to the extent that much of her day was spent sorting and answering mail. She added a “Cole Family Scholarship” to a student at Crane and an endowment scholarship donation to SUNY Canton in memory of son Perry who died in a farm-related accident in 1979. She also made a generous donation to the Canton-Potsdam Hospital Foundation.

Betty is survived by her two daughters, Virginia Leamy and her husband Ward of Ogdensburg and Linda Watrous of Canton. Her grandchildren – Keith Watrous and wife Anastasia, Gregory Watrous and wife Jeannie, Christine Cavello and husband Christopher and Alicia Leamy. She is also survived by seven great-grandchildren; and her companion, Ken Masters.

Among her many friends who helped and guided her with loving care thru her life was Dr. Robert Rogers. Mert was one of his first patients in his practice of over 30 years and Betty’s care followed along. Dr. Kris VanWagner helped stabilize Betty’s vision as her vision lessened in her later years. Betty and her family extend their grateful appreciation for the care they and their staff provided.

Betty and Rev. Bill Hart became close friends in the ministry of the spoken word and music of the organ for many years as a working team together. Someone once asked Rev. Hart when the service began and Bill replied “When Betty gets here.”

Due to the current pandemic calling hours will be held privately for the immediate family. A memorial service will be held at the Methodist Church in Old DeKalb (at a date and time to be announced) as soon as the current restrictions have been lifted.

Condolences and memories may be shared with the family by visiting www.lawrencefuneralhome.org