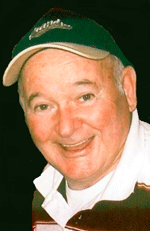 HEUVELTON — Funeral Services for Bernard G. Hynes, age 85 of the West Lake Road in Heuvelton, will be held at 2:00pm on Thursday (June 23, 2022) at the Fox & Murray Funeral Home with Rev. Kevin O’Brien officiating.

Burial will follow at the Hillcrest Cemetery in Heuvelton.

Calling hours will be held also on Thursday from 12:00pm until the time of the funeral. Mr. Hynes passed away at his home on Saturday evening June 18, 2022 surrounded by his loving family.

He was predeceased by his parents; his wife Sandra in 2017; a son Bernard in 1999; and an infant sister Mary Margaret Hynes.

Bernard was born on May 15, 1937 in Ogdensburg, a son of Ralph & Hazel (Cleland) Hynes. He attended local schools in Heuvelton, Kokomo and DePeyster.

He was later married to Sandra Morse on November 23, 1972 in Gouverneur.

He also worked as a produce clerk at P & C Foods for 19 years.

He enjoyed gardening, carpentry, fixing and puttering with things, bowling and spending time with his family.

Bernie’s daughters Sarah and Peggy worked together to keep him at home through his extended battle with Parkinson’s.

“He was that kind of a Dad….. and it was our way of honoring such a wonderful man”.

Memorial contributions can be made to Hospice of St. Lawrence Valley or the Heuvelton Volunteer Fire Department.

Condolences and fond memories can also be made online at www.foxandmurrayfuneralhome.com.