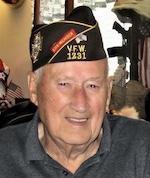 Raymond was born October 20, 1931 in West Pierrepont, a son of the late Basil and Elsie (Curtis) Fountain. On October 25, 1953, Raymond was united by marriage to Joyce S. Dafoe at the All Saints Episcopal Church in Pyrites, New York.

Raymond served his country honorably in the United States Army for a full tour in Korea, although he was injured during battle, he returned to Korea following recuperation at home. For his service, Raymond was awarded the Good Conduct Medal, United Nations Service Medal, National Defense Service Medal and the Korean Service Medal with three Bronze Stars.

After his discharge, Raymond returned to Pyrites where he and Joyce raised their family. He worked as a Millwright for J&L Steel in Star Lake for 30 years, retired and continued working for Pyrites Hydro for another 10. Raymond was a member of the United Steel Workers Union, member and past chief of the Pyrites Fire Department, Life Member and past Commander of the Edward C. Seymour VFW Post 1231, Canton, and member and past commander of the St. Lawrence County Veterans of Foreign Wars.

In addition to his beloved wife, Joyce and his parents Basil and Elsie, Raymond is predeceased by five brothers, Skeek Fountain, Floyd Fountain, Junior Fountain, Peanut Fountain and Lawrence Fountain and by three sisters, Betty Beachard and Geneva Wood and June Matthews.

Contributions in his memory may be made to the Pyrites Volunteer Fire Department, 1 Churchill Street, Pyrites, New York 13677 or to the Edward C. Seymour Post 1231 VFW, 34 Gouverneur Street; Canton, New York 13617.

Memories and condolences may be shared online at www.olearyfuneralservice.com. Arrangements for Raymond H. Fountain Sr. are under the care of the O’Leary Funeral Service of Canton.