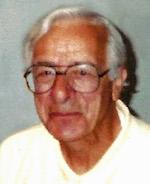 MASSENA -- Anthony (Tony) Joseph LaRosa was born in Massena, on August 22, 1928 to Mary Bronchetti and Salvatore LaRosa. He graduated from Massena Central High School in June, 1946 and went on to earn his Bachelor’s degree in Pharmacy from Albany College of Pharmacy in June, 1950. He was inducted into the U.S. Army in September, 1950 at Fort Hood, Texas and obtained the rank of Sergeant with the 2nd Armored Division stationed in Germany. After his honorable discharge from the military, he returned home and started his career as a pharmacist, first in Syracuse, and then in Gouverneur, working for B.O. Kinney.

He met the love of his life while in Gouverneur, and married Eleanor (Lee) F. Olivera in New York City on August 21, 1954 at Our Lady of Lourdes Church. They moved to Massena in 1956 and established LaRosa Pharmacy in 1957, where he worked until its closure in 1969. He finished his notable career working for the Saint Regis Mohawk Tribe Health Services for 15 years, retiring in 1994.

Tony loved his family, his church, his golf, his cards, his auxiliaries, and his Yankees. He was a kind, loving, and nurturing husband and father with a ready smile. He was a member of Sacred Heart Parish, now called St. Peters Parish, since 1956, and sang in the choir for many years.

Tony was a past member of the Massena Country Club, Massena Elks Lodge No. 1702, Knights of Columbus, and the Italian American Club, where he loved to play briscola and pinochle with his friends. Picnics at Barnhart Island were a staple of the LaRosa family and their friends every Sunday after morning Mass and a round of golf.

Tony is survived by his devoted wife, Eleanor; his three sons, Anthony P. and wife Chris S. of Kenner LA, Christopher R. and wife Laura C. of Sheridan WY, Paul V. of Newton MA; his daughter, Maria L. and husband Raymond Daly of Arlington, MA; and his eight grandchildren, Steven, Lucy, Jack, Peter, Liam, Gabriel, Aidan, and Lydia, who brought him great joy. He is also survived by a brother, Samuel LaRosa and wife Susan L. of Stouffville, Ontario. In addition to his parents, Tony was predeceased by his brother, Michael LaRosa.

A Mass of Christian Burial will be held on 10:00 AM Friday, November 20, 2020 at the Church of the Sacred Heart with Rev. Mark Reilly officiating, with burial to following with Military Honors in Calvary Cemetery, Massena.

Family and friends are encouraged to share memories online condolences by visiting www.PhillipsMemorial.com