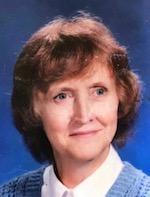 Anne was born on March 15, 1933, in Ogdensburg, the middle of five daughters born to Michael and Mary Adelaide (LaVenture) Sherry of Ogdensburg. She graduated from St. Mary’s Academy, Ogdensburg, in 1951 and received her Bachelor’s degree from Plattsburgh State Teachers College. Anne then taught for both the Canojoharie and Knox Memorial Central Schools.

On June 21, 1958, Anne married Gerald Whalen, of Canton, at St. Mary’s Cathedral in Ogdensburg. In the early years of their marriage, Anne devoted her time to raising their children. She began her early education career in 1970 at Canton’s St. Mary’s Parochial School teaching Kindergarten. She later returned to graduate school and completed her Master’s degree in Education at Potsdam State University in 1972. In 1986, she joined Edwards-Knox Central School as a Pre-First Grade teacher. Anne joined her husband in retirement in 1996.

Anne was devoted to her family, her Roman Catholic faith, and the North Country community.  She loved her home in Canton, where she often hosted family reunions with her sisters and their families, which included 20 nieces and nephews.

During Anne’s younger years, she spent summers working at the Lake Placid Club on Mirror Lake in Lake Placid and at Santa’s Workshop in Wilmington. In her retirement years, Anne regularly traveled to the Boston, Rochester, and Dallas areas, to visit her children and her sisters.

Anne was predeceased by: her parents, Michael and Mary Adelaide Sherry; a brother, Joseph, who died at birth; her sister, Mary Sherry Wagner who passed away in 2009; and a brother-in-law, Michael Geraghty, who died in 2012.

In lieu of flowers, the family asks that donations may be made to Hospice and Palliative Care of St. Lawrence Valley or St. Mary’s Catholic Church in Canton.

Memories and condolences are encouraged at www.olearyfuneralservice.com.