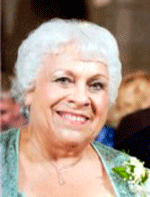 OGDENSBURG - Funeral services for Ann J. Winters, age 84, of Tuck Road, Ogdensburg, will be held at 10:00am on Tuesday (May 10, 2022) at Fox & Murray Funeral Home with Deacon Mark LaLonde officiating.

Calling hours will be held on Monday from 2:00 – 6:00pm at the funeral home. Mrs. Winters passed away at St. Joseph’s Hospital on Tuesday (May 3, 2022) surrounded by her loving family.

Ann was predeceased by her husband Ronald in 2015; and three brothers Donald, Francis & Gary LaRue.

Ann worked many years as a clerical payroll worker for Rockland State Hospital, Newell’s Manufacturing, St. Lawrence Psychiatric Center, and the Lisbon Central School Business Office, where she retired from after 28 years of service.

Ann sold Mary Kay Cosmetics and took care of the books for the Winters Milk Haulers business, alongside her husband for many years.

Memorial contributions can be made to the St. Lawrence Valley SPCA, or the Lisbon Volunteer Fire Dept.

Condolences and fond memories can also be made online at www.foxandmurrayfuneralhome.com