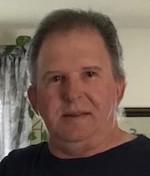 Angus was born on March 7, 1957 in Potsdam, the son of the late John Paul Sr. and Gloria (Rockwood) LaMora. He was a graduate of St. Lawrence Central School. On June 18, 1977, he married Kathy Smith at St. Lawrence Catholic Church in North Lawrence.

Angus worked for North Lawrence Dairy for over 20 years. He also worked for a time at the St. Regis Mohawk Casino and was most recently a bus monitor for Massena Head Start. He enjoyed fishing and riding his moped.

Angus is survived by his wife, Kathy; his children, Angus Jr. and Sherry LaMora of Brasher Falls, Jason LaMora of Massena, Shawn and Darci LaMora of Potsdam, Brandon and Erin LaMora of Fort Covington, Nicole and Nate LePage of Stockholm, and Brooke LaMora and her fiancé, Brandon Hebert of Westville; his grandchildren, Andrew, Colton, Claire, Lillian, Jared, Grace, Dylan, Noah, Zachary, Kyle, Linkin, Lorelei, Stanley, and Nathan; his sisters, Sandy Klem and Bill Burnett of Webster and Sue and Scott Simms of Brasher Falls; his brothers, Paul and Linda LaMora of California, Chris and Karen LaMora of Marion, NY, Tim and Elain LaMora of Massachusetts, Mike and Julie LaMora of Wolcott, NY, and John LaMora of Texas; and many nieces and nephews.

In addition to his parents, he was predeceased by triplet grandchildren, Elaine, Elijah, and Elisabeth LaMora on January 21, 2012; and a brother, Bernard LaMora.

There will be no calling hours. A graveside service will be held at 2:00 PM on Wednesday at Calvary Cemetery Chapel.

In lieu of flowers, those wishing may consider donations to the Ronald McDonald House in Burlington, Vermont.

Arrangements are with the Donaldson Funeral Home, Massena, where memories and condolences may be shared with his family online at www.donaldsonfh.com.