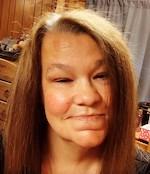 Angie was born June 2, 1978 in Potsdam, daughter of Michael G. Delosh and the late Joan K. (LaRose) Delosh. She was a 1996 graduate of Norwood-Norfolk Central School.

She was employed by Jrecks for several years before she started her career at SUNY Potsdam PACES until having to leave in 2019 due to illness. She enjoyed baking and watching her favorite TV Shows, no commercials please; babysitting and spending time with friends and family, especially her great nieces and nephews.

Friends and family may call at the Donaldson-Seymour Funeral Home on Monday 11-1PM where a funeral service will be held at 1PM with Rev. Lee Sweeney officiating. Burial will follow at Holy Cross Cemetery in Hopkinton.

Donations may be made in Angie’s memory to the Potsdam Rescue Squad.

Arrangements are under the care and guidance of the Donaldson-Seymour Funeral Home, where friends and family are encouraged to share memories and condolences online at www.donaldsonseymour.com.