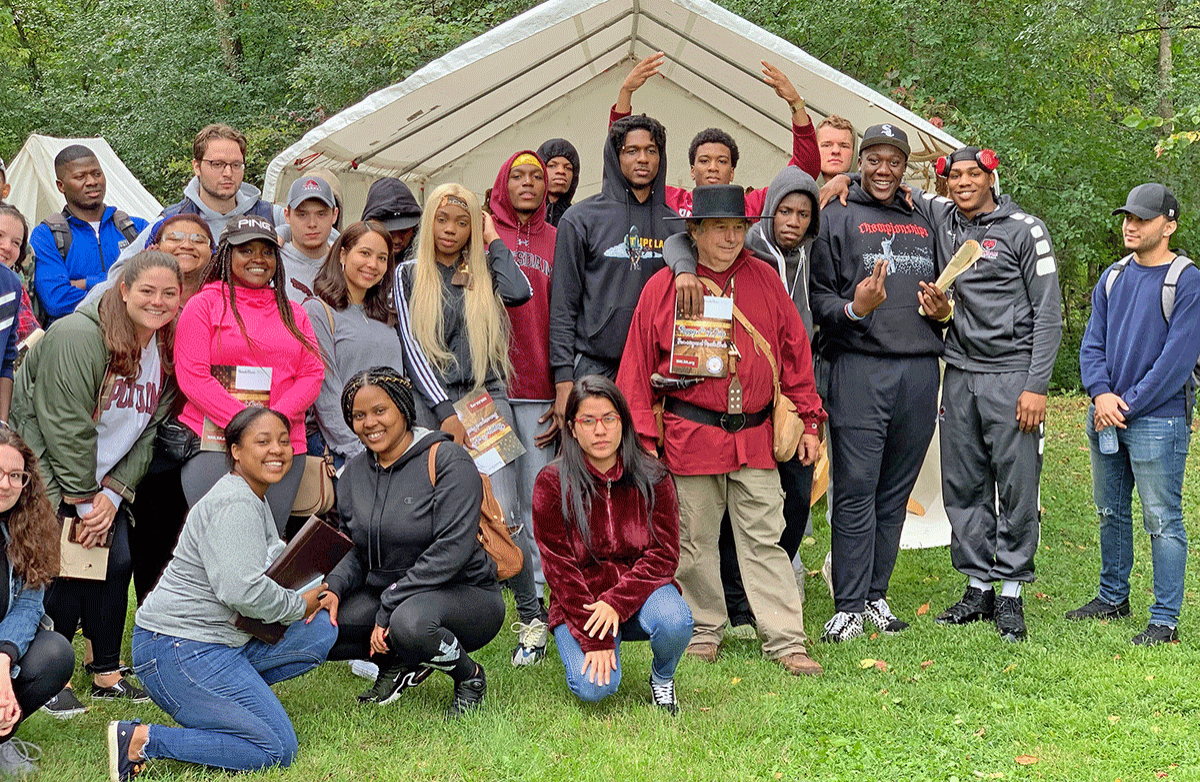 In partnership with the Waddington Hunting and Fishing Club, SUNY students enrolled in Rhetoric of the North Country (Comm 390) course attended a state-level regulation outdoor safety course before firing a series of black power in-line rifles, muskets and throwing tomahawks.

This happened on Saturday, Sept. 14 during the club’s weekend-long Black Powder Shoot event in Madrid. The students learned about the rules, regulations, safety guidelines and history of outdoors sportsmanship. Students also had an opportunity to learn even more in-depth New York State hunting laws and regulations during a presentation from a St. Lawrence County-based New York Department of Environmental and Conservation Officer Bret Canary.

Rhetortic of the North Country is the newest class created by veteran Potsdam professor Dr. John Youngblood to allow students to be introduced to lifestyles and histories they might not otherwise be exposed to. Students will engage in a combination of classroom and hands-on excursions to learn about farming, maple syrup production, Amish culture, the Adirondacks, the Akwesasne tribe, apple orchards, and numerous other entities and practices uniquely North Country.

The class field trip to the Waddington Hunting and Fishing Club is the first of the planned events and presentations for COMM 390: Rhetoric of the North Country, which according to Youngblood is quite fitting, since the club, which celebrates its 110th anniversary this year, hosts a series of outdoor excursions throughout the year for outdoor sportsmanship enthusiasts and newcomers who wish to learn about how people lived in the North Country 100 years ago. Club Vice President Lloyd Hargrave enthusiastically welcomes the opportunity to educate younger generations about the heritage of rural life through hunting and fishing excursions.

“I grew up hunting and fishing throughout the North Country and Adirondacks. This is a great heritage that is being lost to today’s fast-paced electronic-fueled world,” said Hargrave, a North Country native. “Partnering with Dr. Youngblood’s class allows us to educate young people who may have not been previously exposed to outdoor sportsmanship by sharing our passion and heritage.”

Students reported enjoying the experience and learning a great deal. Aaron Armstrong of Lisbon, said, “It felt like a day in the past.” His classmate, Alica Collymore of Brooklyn declared, “It was one of the most exciting experiences of my life. I can do anything now!”

Hargrave and other club members noted how quickly the students adapted to black powder shooting and tomahawk throwing, a first for many of them.

“We are excited that they were so engaged to learn about outdoor sportsmanship culture,” Hargrave said.

Youngblood pointed out his students had fun, while learning a lot from Hargrave.

“I look forward to working with the club and Lloyd Hargrave in the future for various projects and classes,” Youngblood said. “He is an interesting person to learn from and students learn better when they are interested and having fun.”

Youngblood noted that developing partnerships with North Country organizations allows him to provide his students a well-rounded educational experience.