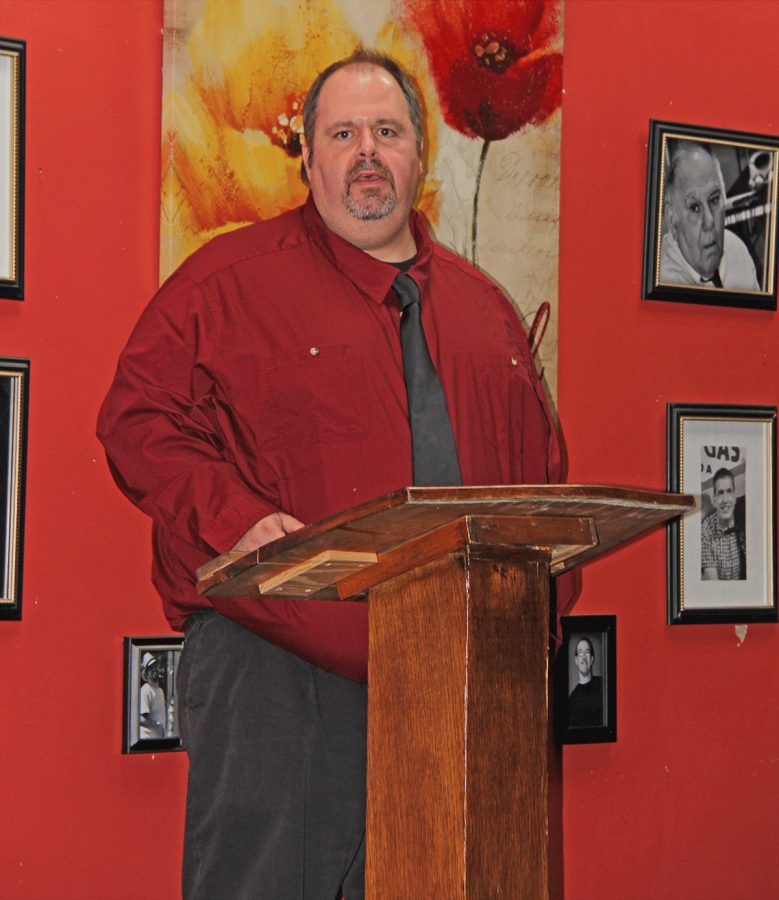 He wasn’t a graduate, rather Matthie, who serves as United Helpers Behavioral Health and Life Skills QA-CQI Coordinator, and has worked with the developmentally disabled for more than 20 years, was celebrating the success of a program he helped create.

He said the apprenticeship program, which was created in collaboration with the administrative team at United Helpers Behavioral Health and Life Skills, St. Lawrence-Lewis BOCES, and the New York State Department of Labor, was designed to create a career path for people working as DSPs.

“I’ve always wanted people who work as DSPs to be able to do this as a career and have a clear career ladder,” Matthie said. “I feel this helps us accomplish this and I’m immensely proud of this program.”

“Jason had a vision for this program and was able to bring that to fruition,” said United Helpers CEO Stephen E. Knight. “He says he’s proud of this program and he should be. The development of these apprentices has been remarkable, and would not have been possible if it weren’t for the efforts of Jason and everyone involved with this program.”

One student has already been promoted and is now working as a Habilitation Coordinator.

UH is now recruiting for the next class of DSP apprentices.

“You do not have to be a DSP now to enroll in the program, but by doing so, you would become a DSP,” he explained, adding that DSPs work with individuals who have developmental disabilities.

If you enjoy working with and helping people and working as part of a residential care team, this may be a good entry-level career path for you, he said.

For those who are already DSPs, United Helpers cover the entire cost of tuition. If you’re not already a DSP, Matthie said you would take a short introductory course at your own expense. Following the completion of that course, you would go through the United Helpers hiring process. If hired, you would become a DSP, and United Helpers would pay for the remainder of the program.

Aside from the benefits of furthering your education, Matthie said the program also offers several other benefits, including being paid for the time you’re in class, mileage for the commute back and forth to class, periodic incentive bonuses, and a $2 per hour raise that comes at the completion of the program.

“This program isn’t just a United Helpers thing either,” he said, noting the apprentices will each receive a journeyman’s card that is recognized anywhere in the U.S.

“Once students complete the program, they’re not only in a position to empower themselves, but they can mentor other DSPs, and better advocate for the people we serve,” he said. “We are now supporting people with a much greater variety of needs, many of whom are able to self-advocate. The skills learned in this program are things that they can apply to their job right away.”

“This program raised our level of awareness to not only help our residents, but also fellow staff members,” he said. “By taking up this challenge, we pushed ourselves to step out of our comfort zones which built up our confidence in our abilities to do the job and step up and meet the challenge of being a journeyman DSP.”

Challenge is a good word to describe the program, because Matthie warned it will not be easy, but that’s by design, he said.

“This class is designed to be taught at a junior college level,” Matthie said, adding though that as long as students remain dedicated to the program, there are supports in place to help them get through it.

“BOCES has been very supportive of our students, some of whom struggled in school, or maybe even had a learning disability,” he said. “If people remain committed to the program and they work through it, they will succeed. The program is designed to be challenging, but it’s not meant to be exclusive.”

Patrick Flagg also graduated from the program, and he said the support received from St. Lawrence-Lewis BOCES Adult Education Coordinator Alex Pacific, who led the classroom portion of the program, Matthie, and his other classmates helped him make it to graduation.

“Everyone helps everyone,” Flagg said. “We really became kind of a family as we worked our way towards graduation.”

Fisher and Flagg were joined in the class by six others including, Patricia “Trish” Amo from the Centennial IRA in Ogdensburg, Jason Cameron and Jamie Fields from the Kendrew IRA in Rensselaer Falls, John Gammon and Victoria Dewey, from the Flackville IRA in Heuvelton, and Deborah “Deb” Smith from the Lisbon IRA.

More info, contact Matthie via email at [email protected]. Matthie or another member of the staff development office may also be reached at 315-394-6702.