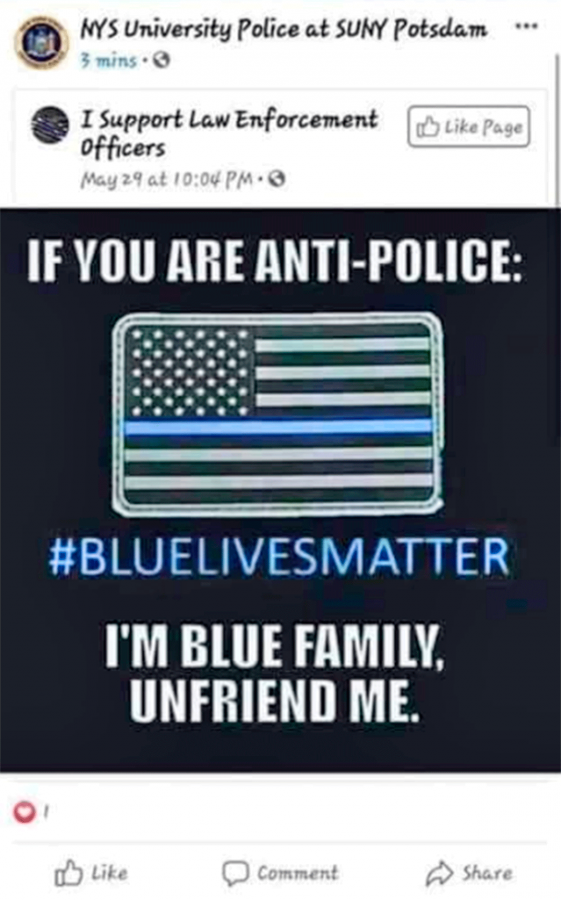 The SUNY Potsdam University Police ‘mistakenly’ (as they put it) posted a #bluelivesmatter meme and then removed it Sunday,’ said Kevin Marcinko, who submitted the screenshot above. They have since prevented people from republishing the post/meme in the comments on the thread.

POTSDAM -- SUNY Potsdam Police have come under fire for sharing a Blue Lives Matter meme on its Facebook page.

“This morning a member of our team inappropriately shared a very insensitive post on our Facebook page. While the post was immediately taken down we don’t want to diminish the hurt and frustration that you may be feeling,” Tim Ashley, SUNY Potsdam chief of police said on Facebook following the original post.

The meme said “If You Are Anti-Police: I’m Blue Family, Unfriend Me.” It also include the hashtag BlueLivesMatter.

The phrase Blue Lives Matter is a countermovement in the United States advocating that those who are prosecuted and convicted of killing law enforcement officers should be sentenced under hate crime statutes. It was started in response to Black Lives Matter after the homicides of NYPD officers Rafael Ramos and Wenjian Liu in Brooklyn, New York on Dec. 20, 2014, according to Wikipedia. The Blue Lives Matter emblem is a black-and-white American flag with a single blue stripe. Civil rights advocates argue the phrase "Blue Lives Matter" is racist and intended to silence or intimidate activism from movements like Black Lives Matter.

“The tragic death of George Floyd is not acceptable and reminds us as a police department that we must work to continue to earn your trust. We took an oath to serve and protect all of our community members regardless of race, religion, or background,” he said. “This situation will be thoroughly investigated, and we have been in touch with SUNY Potsdam’s Office of Diversity, Equity, and Inclusion and Human Resources Department on steps that we can take as a department.” “Again, we apologize for the pain and sadness caused by this situation. As a department and as individuals we must treat everyone with equal respect,” Chief Ashley said. “We can and will do better.

The apology from the chief, and a previous post apologizing for the meme drew hundreds of comments.

About seven hours prior to the chief’s response, someone from the NYS University Police at SUNY Potsdam Facebook page posted: “The University Police department would like to apologize for a post that was mistakenly made this morning. It does not reflect the view of the department or the College. Please know that we have restricted posting abilities to prevent any future mistakes.” 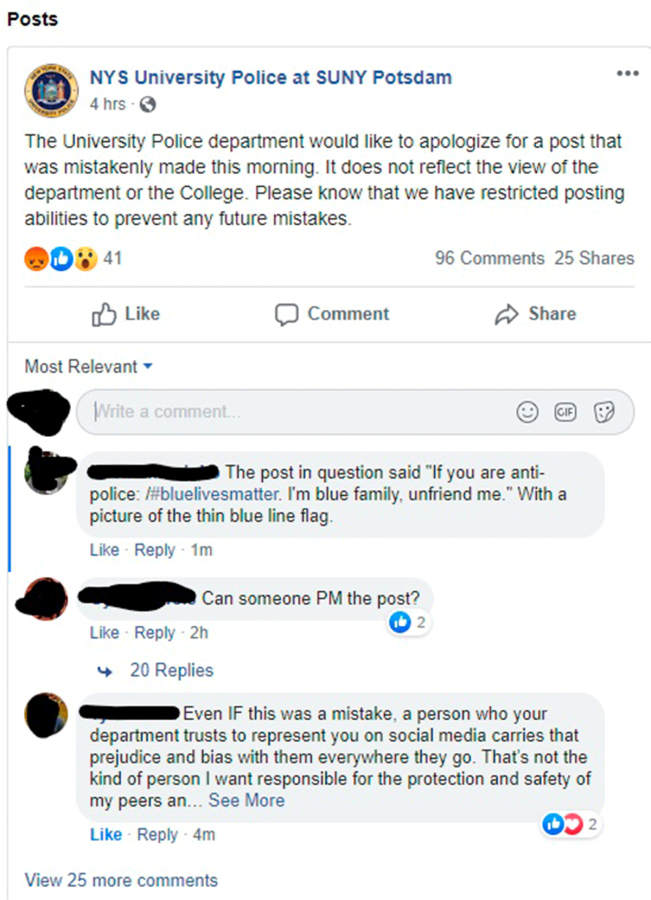 A screenshot of the original apology from SUNY Potsdam Police. Photo submitted by Kevin Marcinko.