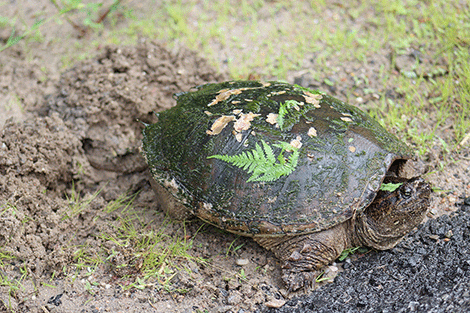 This snapping turtle was laying its eggs along a roadside in Pierrepont recently. Snappers are one of several species of turtles which seek the sandy shoulders of St. Lawrence County roadways, among which are the endangered Blanding's turtles. North Country This Week photo by Adam Atkinson.

POTSDAM – A SUNY Potsdam biology professor is urging motorists to avoid turtles, which are currently braving roadways in search of dry land to lay their eggs.

Johnson is working with several students and recent alumni of the college's biology program to post special turtle crossing signs on county and town roads at critical locations where there is evidence that turtles are especially at danger of being killed.

"Blanding's turtles can live to be 80 years old and are listed as a threatened or endangered species in nearly every state where they are found, including New York State. At this time of year, turtles leave their wetlands to go to uplands to nest, and invariably they cross roads. Older females are critical to maintaining the population because they are more successful at breeding, so it is very important to try to protect them during nesting season in particular," Johnson said.

He is being assisted by two SUNY Potsdam students, Jase Briggs '20 and Gyle Dominy '18, and by two recent graduates, Juliana Badalucco '17 and Jennifer Flickinger '17. Flickinger is also working as a seasonal technician for the New York State Department of Environmental Conservation this summer. In addition, DEC Wildlife Technician Anthony Mineo '15 and DEC Biologist Angelena Ross '02 are providing vital support for the project.

The temporary signs will be posted over the next month, to coincide with the annual nesting period for several species, including painted turtles, snapping turtles and especially the Blanding's turtle. Automobiles are the top threat to survival for the threatened Blanding's turtle species, which is considered at a high risk for extinction. The North Country is home to one of the largest populations of the at-risk species in the Northeast.

The turtle crossing signs are set to be posted on the following local roadways:

• County Route 14 in the Town of Canton

• County Route 27 (Outer Park Street) in the Town of Canton

• Irish Settlement Road in the Town of Canton

• County Route 27 in the Town of Lisbon

• Swamp Road and Baker Road intersection in the Town of Lisbon

• Tracy Road in the Town of Lisbon

• County Route 30 in the Town of Madrid

• County Route 34 (West Potsdam Road) in the Town of Potsdam

• County Route 39 in the Town of Louisville

• Nation Road in the Town of Louisville

Although Johnson and his team are currently unable to post their signs on state roadways, they would also like to remind local motorists to slow down and take caution when driving on New York State Route 68 between Canton and Lisbon, near the Upper and Lower Lakes Wildlife Management Area.

In addition to posting the signs and testing their effectiveness, Johnson and his team members are also working to monitor the local turtle populations. They are testing nest site creation methods to reduce the need for females to cross the road, and are also working on measures to protect nests from predators such as raccoons and skunks

Johnson has been working on conservation projects to protect the Blanding's turtle since 1998, and has received approximately $300,000 worth of grant funding to support his efforts over the years, working with numerous undergraduate and graduate students. He regularly collaborates with the DEC and Dr. Tom Langen at Clarkson University as well as with wildlife officials and scientists from Massachusetts, Maine, Pennsylvania and New Hampshire regarding this research.